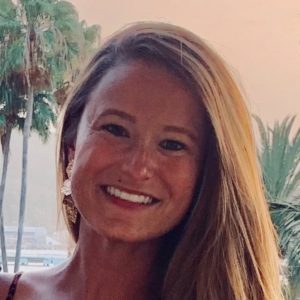 Katharine Ewing was born and raised in Greensboro, NC. She began swimming for the CSA at the age of seven, fell in love with the sport, and began swimming year-round soon after. She swam with SGSA when she turned nine and joined STAR Aquatics four years later, at the age of thirteen and continued to swim and compete through high school.

Katharine attended Wesleyan Christian Academy in High Point, NC, from Kindergarten through her senior year of high school. She began competing for the Trojans by the seventh grade, and earned her first “AA” cut in the 100M Breastroke when she was thirteen. She would later earn and hold “A” cuts in the 200M Freestyle, and 200M Individual Medley by the time she was sixteen years old. She was among the top ranked 12 for six years in the 100M Breastroke and 200M Freestyle in the NCISAA Women’s 3A Division while competing for Wesleyan. She was named Most Valuable Swimmer both her sophomore and junior years of high school for the Lady Trojan’s swim team.

Katharine graduated from the University of North Carolina at Wilmington in May 2012, where she received her bachelor’s degree in Elementary Education.

Katharine previously coached at Green Valley Park from 2006 until 2018, where she held both assistant and head coaching positions. During the off-season, she teaches 4th grade at Cornerstone Charter Academy here in Greensboro.

“I feel so fortunate and blessed to have been given this opportunity to lead and work with such an incredible team! I am looking forward to building relationships with the swimmers and parents, and watching the athletes grow as both swimmers and individuals!”